The authors describe a case of splenic cyst treated with splenectomy with preservation of the inferior pole, which is the first description in the literature of the use of this technique in human beings

The spleen cysts are rare, being observed in 0.075% of the autopsies. They may be classified as true cysts or pseudocysts. The true cysts have walls with cellular coating and the pseudocysts are not provided with internal coating.1, 2, 3 The surgical treatment for spleen cysts is indicated for lesions larger than 5cm and for symptomatic lesions.

The aim is to preserve as maximum splenic tissue as possible. The subtotal splenectomy preserving the inferior pole (SSPIP) is an alternative yet to be described for splenic cyst treatment, what justifies the present case report. 4, 5 This technique has already been described and reviewed on laboratory animals.6

A.K.B., 49 years old, woman, admitted to the General Surgery Service at Santa Casa de Misericórdia de Vitória Hospital in February 2001, reporting twinges of pain in the left hypochondriac region, for one year, medium-intensity, intermittent, triggered by food ingestion, associated to severe left low back pain. She said she had lost 7kg in seven months. She did not report fever, vomit, diarrhea or any other symptoms, only that she was hypertensive in regular use of propranolol.

She was in good general health status, with a palpable spleen two centimeters below the left costal margin, abdomen without pain response to superficial and deep palpation.

In the hemogram, the counter tests of hepatic function and the urinalysis were within the regular parameters.

The computed tomography of the abdomen has evidenced an enlarged spleen showing a voluminous cystic image, measuring 9.7 x 8.8 cm, of homogeneous and hypodense content, determining mild compression to the adjacent structures (See Figure 1-B).

During the surgery, a voluminous cyst was identified in the superior portion of the spleen. The SSPIP was carried out (See Figure 1-A). The yellow-citrine liquid content of the cyst was sent for neoplastic cells research, bacterioscopy and culture. The spleen portion which was extracted was sent for anatomopathological study.

The analysis of the liquid was negative for neoplastic cells. At the macroscopic evaluation: spleen with cystic formation measuring 11.5 x 10 x 5cm, with grayish corrugated external surface. The internal surface of the cyst was corrugated, presenting light grayish-brown coloration. Upon sectioning, reddish and rawish tissue.

The patient was discharged on the fifth post-operative day without any intercurrence. She was followed up weekly in the first month and, after that, monthly.

The treatment for splenic cysts is controversial. On those cysts with small diameters, with asymptomatic patients, when the lesion may remain unaltered the whole life, it is recommended radiological follow up (mainly through ultrasonography) and watchful waiting. On those with diameters larger than 5cm and/or symptomatic cysts, surgery is indicated. Some authors believe that the use of the partial splenectomy technique, which does not damage the spleen immunological functions, is the treatment of choice for cystic spleen lesions.4

In this case, the patient was operated for being symptomatic and because the cyst was voluminous. During the surgery, it was observed an inferior polar artery directed to the spleen. After the splenic artery ligation, it was observed a delimitation in the splenic parenchyma color, with the superior 2/3 poorly perfused, while the inferior 1/3 remained bleeding. So, we decided to preserve the parenchyma irrigated through this inferior polar vase (See Figure 1-C). The surgical procedure was uneventful, as well as the post-operatory period, being the patient discharged on the fifth day after the procedure. 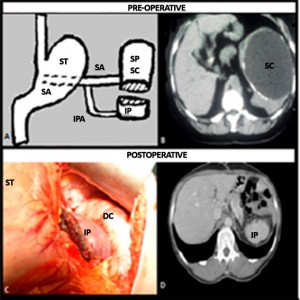 B– To observe pre-operatory tomography with splenic cyst (SC);